The building dates back to about 1863. It was built by Carlo Gatti, an immigrant from Switzerland, who was prominent in the ice trade and a self-made man. Before that date, the first ice well was dug, and it must have been open or covered with a simple wooden cover. Later, around 1863, the second well, and the building around it were added. The timber roof is original, as are the present sides of the building. However, in 1904-6 technological change led to a major rebuilding. It was now possible to make ice in London so the import of ice freom Norway was ended. The ice wells were redundant. Two floors were inserted, of concrete construction with rolled steel joists. The front of the building was rebuilt entirely, as a house for a stable keeper. The rear wall was also rebuilt. A horse ramp was added to the interior as the new role was as a horse and cart depot. Horses would be stabled upstairs, carts on the ground floor. Previously, stables had been provided to the side of the building. 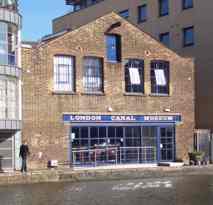 In the 1920s technology again brought change as the horse ceased to be the main motive power for deliveries and the internal combustion engine began to take over. After that, warehousing was the main use of the building until it was made ready for use as a museum prior to opening in 1992. Remnants of the past are to be seen as you visit. Look for the hayloft door, at the top of the rear wall, where hay could be unloaded into a store in the loft above the stables. On the first floor notice marks on the wall where stable stalls were fixed. As you arrive notice the protective stone that prevents carts from damaging the walls, as well, of course, as the weighbridge for ice carts.

The ice well under the ground floor of the building are viewable via a webcam. Go to the ice well camera page on the main website