There is plenty to enjoy at London Canal Museum. The exhibitions start with an introduction to canals in the UK that puts London in context The main themes are as follows.

The centrepiece of this theme is the narrowboat Coronis. A reconstructed cabin on an original hull shows today's incredulous visitor how people lived in a tiny space that was home to a whole family. Living on board boats was common from roughly the 1840s until the 1950s. There is an audio dramatisation to listen to in the cabin, and also oral history recordings to tell you more about "living afloat". A display of traditional clothing worn by the boat workers adds to the exhibition. 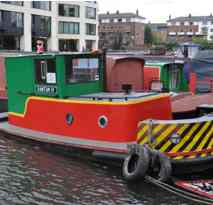 Visitors may go outside the building at the back to the side of Battlebridge Basin, built around 1823, and now something of an inland marina for residential boats. Outside you will usually find our tug Bantam IV, launched in 1950, and the oldest survivor or a type used mainly for canal maintenance. The basin itself is interesting and back inside you can see information about the buildings that once surrounded the water, looking through the large glazed screen that gives you an excellent view even if the weather is bad.

The traditions of arts and crafts of the canal are represented by displays of "Measham" pottery, lace plates, and the famous style of "Roses and Castles"

The ice trade is the reason the museum building was built, around 1863. Two huge ice wells are under the present ground floor and you can peer down into one illuminated well through an opening in the floor. They are the only surviving commercial ice wells that are preserved and accessible. Apart from very rare special days you cannot go down the wells, but you can have an interactive chat with Carlo Gatti, the immigrant from Switzerland who built the building and who was prominent in the ice import business.

Ice was imported from Norway from 1857 to 1904, by ship and then canal boat, to be stored in the building both in the wells and above ground. Gatti explains his business on a screen and you can read more about his life on a flip-book. There is an exhibition of some of the tools of the ice trade, that shows how they were used, and there are artifacts in cases relating to ice and ice cream. Ice was used for food preservation and for cooling drinks, and medically, long before it could be made commercially in the UK. Some ice boxes, forerunners to the modern refridgerator, are on display as is an ice cream tricycle.

Our huge map of London's waterways is a detailed historical survey of the capital's canals and other navigations. It shows canals that were built and closed, and those that were planned but never built, as well as thosethat survive and the links with the river Thames. See London in a new light!

The exhibition includes a large display of model vessels representing the most important types of boat seen on the London canals in the last two centuries. There is an exhibition that explains the many different cargoes carried by boat in the past and our Bolinder engine may be seen up close. You can listen to the sound of a similar engine.

The story of the building of the Regent's Canal, our home waterway, is told in texts and pictures. This is suplemented by a showing of archive film, a fascinating portrayal of the canal in the 1920s, 1930s, and 1940s. There are four archive films shown, two of which were made as silent films. One of these supports the Water and Locks exhibition, and one is about horses on the Regent's Canal. The film show repeats and takes about 18 minutes. 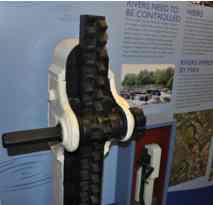 This exhibition, opened in October 2010 by HRH The Princess Royal, makes canal engineering accessible to all. It explains the differences between canals and rivers and how water has to be supplied to the former and managed in the latter. You can read about the history of locks and see a drawing by Leonardo Da Vinci, inventor of the mitre gate, that is nowadays used in most of the world's locks. A mechanical model lock lets navigators of all ages try their hands at working a boat up and down, so you get to understand how a lock works. See wooden paddles, learn about the role of lock keepers, and discover more about the reservoirs and unusual locks and more in a flip-book.

The Horse Power exhibition is one of the most memorable, dominated as it is by a full-sized model horse in a stable that is a recreation of a stable stall from this building as it was after a rebuild in 1904-6. There are displays of veterinary equipment, horse care tools and accessories, and a flip-book is full of fascinating facts about horses on the streets of London and on the canal towpaths of the 19th century.

Children are well provided for at the museum. Most children love boats, and they'll enjoy exploring the cabin in particular, and looking at boats on the canal outside. We have an Activity Zone where kids and their parents or carers can made an arched bridge that an adult can stand on, and look at our canal books and other activities. This is the starting point of Henrietta's Trail, a route around the building for young visitors, discovering the exhibitions in the company of Henrietta, who is, of course, our horse.