Hanwell flight of locks in west London is the largest flight in the capital and a scheduled ancient monument. There are six locks in the Hanwell flight itself and another two a little way above. For the purposes of this online tour we will think of this as a flight of eight locks starting at lock 90, known as "top lock" because it is at the top of the flight.

The top lock is accessible by bus and road so often a starting point for visitors. Use this guide on your smartphone as you explore.

To find the top lock set your satnav to get you to postcode UB2 4XQ or bus E5 stops very close to the top lock.

The Grand Junction Canal was the main line from London to Birmingham - the M1 of its day. From Brentford where it joined the river Thames, it made its way via Hanwell, Uxbridge, Watford and what is now the city of Milton Keynes to Braunston, a small Northamptonshire village where there were connections to the west Midlands.

The engineer in charge of building the Grand Junction Canal was William Jessop (1745-1814) and these locks were built in 1794 as part of one of the first strethches of the new waterway to open. It would be over ten years later that the full route to the north was complete due to trouble with the building of Blisworth Tunnel in Northamptonshire.

The locks adjoin a large hospital, now known as St Bernard's Hospital, but once a rather forbidding place called the Hanwell Pauper Lunatic Asylum. A very large brick wall dating from the early 19th Century ensured that the unruly canal workers could not get in the hospital and the lunatics couldn't get out.

We start our tour at lock 90, one of the two Norwood Locks, known as "top lock". 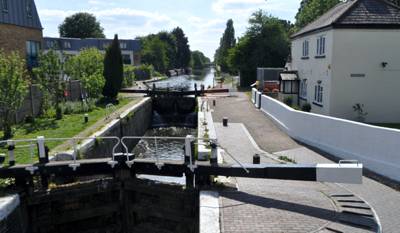 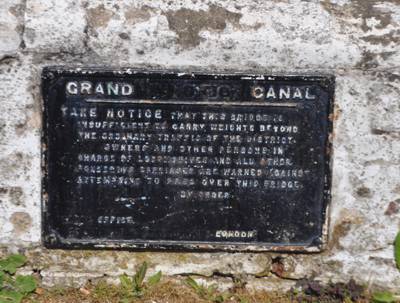 The notice on the bridge reads Grand Junction Canal. Take notice that this bridge is insufficient to carry weights beyond the ordinary traffic of the district. Owners and other persons in charge of locomotives and all other ponderous carriages are warned against attempting to pass over this bridge. Notices like this are still quite often seen around the canal network. Nowadays the route over the bridge is blocked both to cars and ponderous carriages but in the 1850s there was considerable concern about the use of heavy steam traction engines on the roads and bridges, many of which were privately owned. Bridges were built for horses and carts, not for heavy steam engines, and proprietors were concerned lest their bridges be damaged.

Section 6 of the Locomotives Act 1861 declared that It shall not be lawful for the Owner or Driver of any Locomotive to drive it over any Bridge on which a conspicuous Notice has been placed, by the Authority of the Surveyor or Persons liable to the Repair of the Bridge, that the Bridge is insufficient to carry Weights beyond the ordinary Traffic of the District, without previously obtaining the Consent of the Surveyor of the Road or Bridgemaster... Locomotive owners could appeal to the Secretary of State if there was a dispute about whether a bridge was strong enough or not. The canal companies fitted these notices to ensure that if a locomotive passed over without permission, the owner of the locomotive would be liable for the cost of any repairs to the bridge. 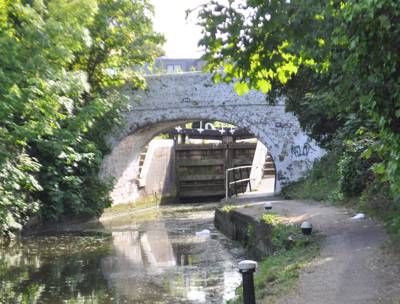 As you go down through the humpback bridge you can turn around to look at it again. It is an original bridge of this canal and typical of canal bridges of the 18th and early 19th century. The arched form gives the bridge the greatest strength to support a load pressing down on it. At the time the hump in the road was not a great inconvenience to slow-moving traffic.

Next you arrive at Lock 91, the second Norwood Lock. Have a look at the side ponds on the opposite side of the canal. If you are able to cross over safely, take a closer look. 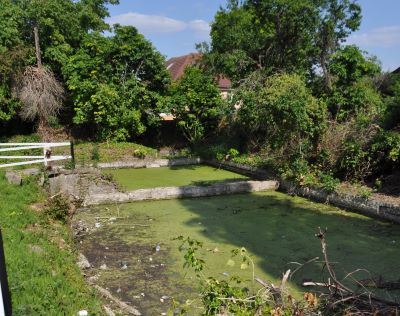 You'll be seeing a number of side ponds on this walk. Sadly, these ponds are not maintained in good condition and there is a great deal of vegetation. The water control mechanisms are not in working order here. The operation of side bonds has baffled generations of onlookers but it is really quite a simple concept. 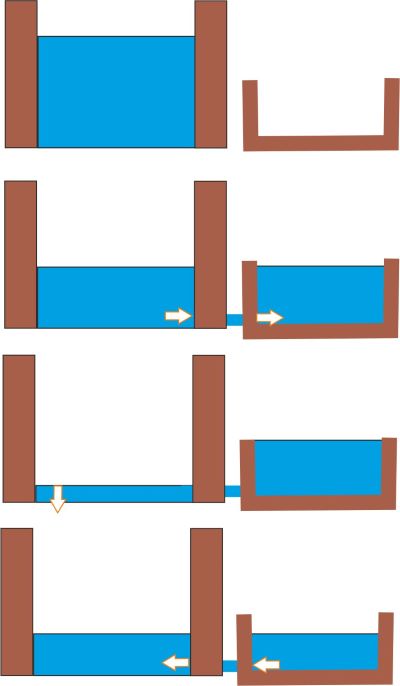 The diagram above may help to explain the idea. When a lock chamber is emptied, the whole amount of water is normally lost Side ponds were one of several methods used by canal engineers to conserve precious water. to the canal below. In a simple arrangement with just one pond beside the lock, half the water is emptied into the adjacent pond, which will always be wider and shallower than the lock chamber and positioned at the right height so that when the lock needs to be refilled, water can be used from the side pond. This saves some water each time, but not a full lock of water.

At Hanwell, the technique is taken a step further with two or three ponds at different heights. Each pond is filled in turn starting with the highest. When the lock needs to be refilled, the two or three ponds can provide much of the water. This saves the need to supply water at the summit level of the canal, some way further north in the Tring area.

The flow of water into and back out of the side ponds was controlled by mechanical paddles, which formed a simple valve to block or permit the flow of water through a sluice. A rack and pinion mechanism raises or lowers the paddles, blocking or opening the route for water between the pond and the lock chamber. 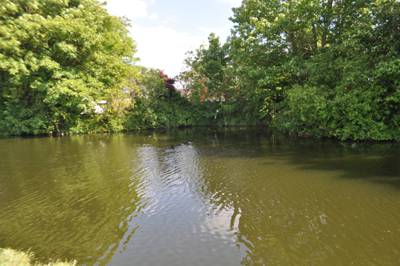 Next feature of interest is a winding hole. "Winding" is a specialist canal term, pronounced the same as in the sentence "the boxer was good at winding his opponents" not as you would say "a winding road", or to put it another way think "wind" not "kind". "Winding" means turning a boat around by doing something similar to a three-point turn that you might do in a car. This can only be done where the canal is rather wider than usual. 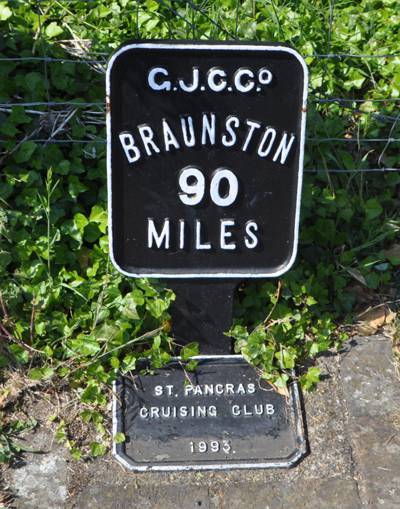 Next, there is a mile-post on our left, restored in 1993 by St.Pancras Cruising Club. The mileage is to Braunston, the northern end of the canal

On the next page, we'll explore a remarable structure built by Isambard Kingdom Brunel.